In order to comprehend the x-ray needs of an orthodontist, one must understand the work of an orthodontist.  An orthodontist is an “architect of the mouth.”  As such, the orthodontist does not just work with the teeth, but rather works with the entire dental-facial complex of teeth, bones, lips, cheeks, joints, sinuses, cartilage, nerves, and muscles.

The standard x-rays for an orthodontist are the panoramic film, the cephalometric film, and TMJ films.

These images allow the orthodontist to evaluate the 2-dimensional position and shape of the teeth and roots in the frontal view.  Additionally, jaw form, bone density, sinus location, nasal cavity form and health, and presence of disease can be detected on this image.

These images allow the orthodontist to evaluate the 2-dimensional position of teeth in the profile view.  Additionally, jaw form, cranial form, jaw relationships, tooth relationships, lip and nose relationships, chin relationships, spine analysis, and presence of disease can be detected on this image.

These images allow the orthodontist to evaluate the 2-dimensional form of the temporomandibular joints (TMJ)s of the patient.  Health of the TMJ is somewhat diagnostic on this image, but must be seen in 3-dimensions for complete analysis (See Cone-Beam X-rays) .

Most orthodontists in the world still utilize xray film technology.  The x-ray is captured by the film after passing through the patient’s head.  The film is developed using a developing liquid.  Once the film has dried, it is ready for viewing in a light box.

Film-type x-rays are the most rudimentary form of x-rays.  In general, quality care can not be provided using such x-rays, as these images show little detail, and are often of little or no diagnostic value.  For example, a tooth may be present but unseen on these films.

Some patients are unaware that their orthodontist still utilizes x-ray films because the orthodontist is “digitizing” or “scanning” the image into a computer.  The patient just sees the computerized image, presuming that the original image was digital.

A digitized x-ray image is only as good as the original film it scanned.

Many orthodontists are now utilizing digital sensor that capture the x-ray.  The resulting image is viewed on a computer screen immediately after capture from the x-ray machine.

While digital x-ray machines look similar, they can be very different.  The best machines are “single pulse” systems.  Most, however, are “continuous scan” systems.

Single pulse systems utilize a single image to capture the lateral cephalometric image.  The only machine currently on the market that does this is the Kodak 8000C.

The benefit of this technology is the clarity of the image.  A single pulse capture system minimizes the impact of patient movement during capture.  The capture is accomplished in just over 1 second!

These systems are good, but they will often provide blurry lateral cephalometric images, because the images are captured in over 10 seconds.  If the patient moves, a blur is apparent.  As such, these systems are of limited diagnostic value.

The latest and greatest in x-ray technology is the Cone-Beam X-ray.  These x-rays are actually CAT (Computer Aided Tomography) scans.  These scans capture a 3-Dimensional image!

These images are extremely useful to the orthodontists, who has historically been forced to interpret 2-dimensional films in different planes, so as to “piece together” the 3-dimensional image.  Cone-Beam technology has eliminated the guess-work and gives a true 3-D rendition, as seen below. 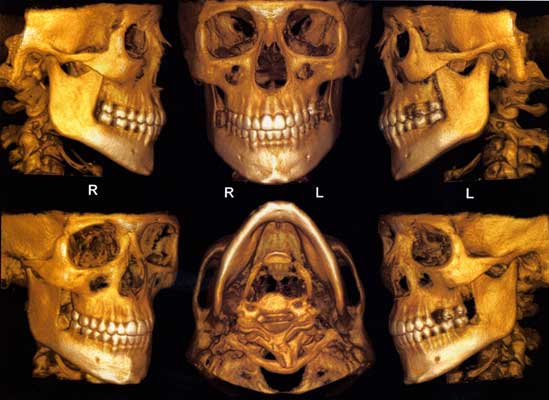 It should be mentioned that this technology eliminates the need for impressions for diagnostic models (an old tradition in orthodontics).  Furthermore, it will likely eliminate the need for impressions for Invisalign, iBraces, and SureSmile in the near future.   It should also be mentioned that orthodontist that utilize the cone-beam system are also more capable of interpreting TMJ abnormalities, as well as other ear-nose-throat abnormalities.

Unfortunately, very few orthodontists are prepared to invest 250K plus annual maintenance and office space to acquire one of these systems.  It is just cost-prohibitive and space-prohibitive for most orthodontists.  Only extremely high technology 5-day-a week-in-one-location offices can consider the option of a cone-beam system.

UNDERSTANDING THE COST & VALUE OF X-RAYS:

X-rays are a vital orthodontic diagnostic tool. It provides information to the orthodontist to define and refine the treatment goal. As with most things, aim is critical. But taking aim begins with vision. Limited vision with poor diagnostic systems dooms your orthodontist to make the same mistake time and again. The image below demonstrates that concept well.

As you have read, all x-rays are NOT the same. If the x-rays being taken on you are more expensive than you expected, ask what type of image is being acquired. If you are fortunate enough to be working with a high technology practice, the cost is worth it, as it will ensure that your orthodontist’s aim is true.